Robin Gray is a chef / grower on the Isle of Arran. 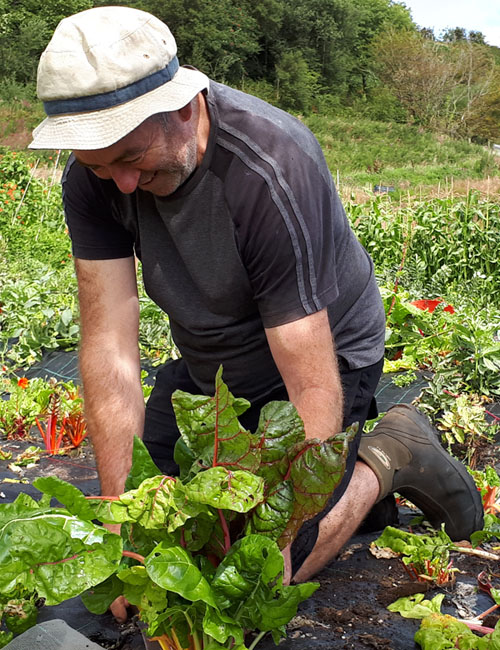 In the early days working as a chef on the Isle of Arran after working in the catering trade in France,  Robin realised it was very difficult to get the quality and variety of salad leaves and herbs in Scotland.  He decided to start growing the produce and rearing the chickens, guinea fowl , ducks and pigs that he wanted to use in the kitchen.

After buying the ground at Sandbraes, Kings Cross in whiting bay in 2005 he expanded with a large poly tunnel that allowed more tender crops to be grown and lengthened the growing season. He started running food stalls at various festivals up and down the country.

Robin now supplies a fantastic array of vegetables & herbs grown on organic principles to some local Arran shops and restaurants as well as to some of Scotland’s top chefs on the mainland.

Robin is now running pop up restaurants, celebration events, weddings, parties and dine in dinner parties using his own home grown or locally sourced seasonal produce to create fantastic fresh food. At locations mostly based on the Isle of Arran. Robin supplies a fantastic array of vegetables & herbs grown on organic principles to a list that includes some of Scotland’s most revered culinary artists.

Normally catering from 20+ people. Smaller group sizes of dine in dinner parties can be catered for - contact for prices.

He likes people to visit the farm and see what food is in season and find out what you like so he can create a menu to suit your celebration.

Robin gets his seafood from his friend Ian who is a local fisherman who lands his catch at Lamlash pier on Arran.

He gets his artisan bread from George at the Blackwaterfoot Bakehouse.